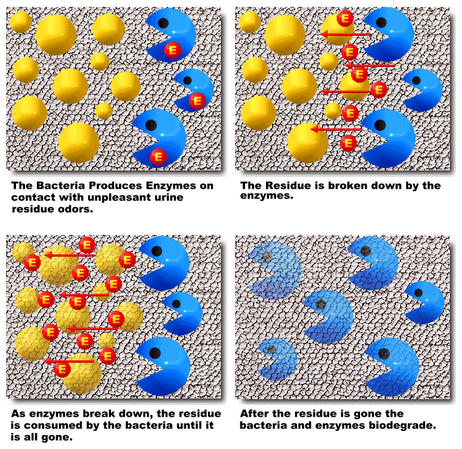 Pro-microbial science: why, where, when & how it works.

GETTING TO THE SOURCE OF THE BIG STINK:

ATX’s Technology controls odors by attacking their cause!

This new innovative Odor & Stain technology promises to clean the air. Known as ATX’s ODOR KILL & Stain Remover. This new technology, is unique. It is a proprietary formula and is solely manufactured by ATX Technologies, LLC.

It combats odors by addressing two causes or sources:

How? The root causes of odor are the production of chemical and biological by-products which emit negative odors, such as ammonia from urine, rotting meat and fish; sulfides from rotting vegetables and eggs; and volatile fatty acids from perspiration, grease and rancid oils. Odors are then perceived when the odor-causing molecules become airborne and interact with the olfactory receptors in the nose.

Until biological technology became available, the only ways to control these common industrial, institutional and household odors were by either:

A. Masking the negative odor with a more appealing fragrance, thereby introducing a second layer of “odor” or

B. By introducing a chemical into the air that actually deadens the receptors in the nasal passages so they temporarily no longer function. (Which means, if any good odors come your way, you can’t smell those either!). But odor-masking perfumes and chemicals that deaden receptors in the nose wear off, and the odor returns because its’ cause persists.

ATX’s ODOR KILL is a major departure from these earlier odor-control methods, Odor Kill technology acts in a unique and revolutionary way. It actually: acts to destroy / digest odors not mask them. This action is accomplished in two ways:

First, a fast-acting neutralizer binds with the odor-causing molecules, preventing the molecules from being vaporized and producing odor, providing immediate relief.

Second, the real active ingredient kicks in, a proprietary microbial blend of self generating enzymes degrades the odor-causing molecules, destroying / digesting them and converting them into harmless cell components of carbon dioxide and water. This combined synergistic chemical and enzymatic/microbial effect makes ATX’s ODOR KILL technology mega powerful, yet very safe for humans and animals and super environmentally friendly.

For example, cat urine treated in the lab with ATX’S ODOR KILL technology and incubated at 20° Celsius for five days ranked one on a scale of one to six in severity of odor. Similar tests with cat urine treated by an odor-masking product ranked 4.2, and when treated with water ranked 4.5.

What was learned in the laboratory was confirmed at home when the new owner of a 200-year-old farmhouse in Virginia used the product in a room long inhabited by numerous cats, unfortunately without a litter box. With the use of ATX’S ODOR KILL technology to eliminate malodors absorbed into floors and surfaces, along with introducing fresh air – the room is “beginning to smell normal again,” according to the homeowner.

Other uses for ATX’S ODOR KILL technology include controlling tobacco odors on fabric and carpet treatments. In tests for odor control, ATX’S ODOR KILL ranked 1.8 out of six in severity of odor when used to neutralize tobacco odors, while the leading national brand ranked 2.8, followed by water at 4.3.

ATX’S ODOR KILL technology from ATX TECHNOLOGIES, LLC is available worldwide under various brand names and through janitorial supply companies. A special formulation is available for the Canadian market that contains components that are listed on the Canadian Domestic Substances List.

Storage and Handling
Store in a cool dry place.
Wash hands thoroughly with warm, soapy water after contact.
Avoid eye and skin contact. Apply as direct spray, not as atomizer.