NEW —- Introducing the Most Advanced Innovation In Odor and Stain Removal Technology! The Power of Science and Nature in Balance.

SEEKS OUT & KILLS ODOR CAUSING BACTERIA AT THE SOURCE AND IN THE AIR !

ATX Odor Kill & Stain Remover concentrate is the result of intensive R&D efforts to engineer a propietary household and industrial odor terminator and stain cleaner that goes many steps and generations beyond all other products available today. We invented this advanced product and we got it right for us and for you! We use it in our home and it is used by all our friends & family members

It is NOT a masking agent or cover up. It does NOT anaesthetize the nose. It simply goes to the source of odors and stains to digest and eliminate them permanently.

How It Works: The 1, 2, 3 PUNCH
1. It uses advanced chemistry to encapsulate and bind the mal odor airborne and surface molecules for immediate odor control and elimination.

2. It uses the microbiology of naturally occurring multiple teams of self generating bio chemical enzymes to synergistically digest the organic compounds that cause odor, breaking them down to benign, odorless compounds such as carbon dioxide and water. Organic residues + ATX Odor Kill> CO2 + H2O.

It simply digests and completely destroys the source of all organic the odors & stains. (It does not remove inorganic matter such as: minerals, plastics, metals, synthetic rubber, glass, ceramic.)

3. It uses enhanced specific surfactants (soaps) to prevent re-soiling of carpets and fabrics. 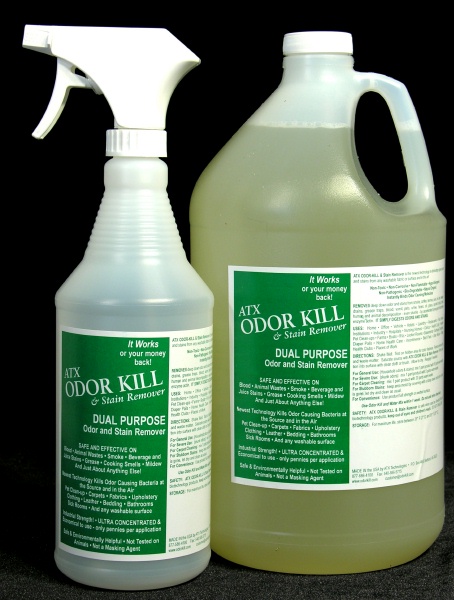 It is safe, 100% water based – No protective masks or clothing is required. Non flammable. Non Toxic. Non Corrosive. Natural Organic Bio- Degradable. Non Polluting. No CFC’s. Non Pathogenic. Hypo- Allergenic. Environmentally Helpful. Safe for use on pets. (avoid eye contact.) During product development, Odor Kill was not tested on animals. It was tested approved and is currently being used in the home, industrial and commercial applications daily.

Directions for use: Industrial Strength – Super concentrated and very economical to use. Mix 10 parts warm water and 1 part ATX Odor Kill for optimum results. Water is a catalyst which awakens the bio-chemical enzymes for aggressive action.

For convenience, it can be applied directly to the source of the odor and stain. It always works faster when you first saturate the site with warm water.

The root causes of odor are the production of chemical and biological by-products which emit negative odors, such as ammonia from urine, rotting meat and fish; sulfides from rotting vegetables and eggs; and volatile fatty acids from perspiration, grease and rancid oils. Odors are then perceived when the odor-causing molecules become airborne and interact with the olfactory receptors in the nose.

Mal Odor molecules, which are emitted by the odor source, must possess two properties in order to be perceptible as odor to the human nose:

1. They must be volatile able to pass into the vapor phase- so that they can travel through the air to the nose.

2. They must possess chemistry, which stimulates the olfactory receptors in the nose.

Historically, odor “control” has usually involved application of perfumes or other odor maskers in areas to be treated. Until advanced biotechnology, microbial enzyme technology became available; the only ways to control these common industrial, institutional and household odors were by either:

A. Masking the negative odor with a more appealing fragrance, thereby introducing a second layer of “odor” Such treatments do not decrease odor; rather they actually increase it by adding a high level of a less objectionable odor to overpower the malodor. Unfortunately, the effect may be overpowering, or only slightly less objectionable than the odor which was originally present.

B. Anaesthetizing the nose receptors is another common method consists thanks to volatile, flammable chemicals, (i.e. citrus) so the receptors cannot function. This is done by introducing a chemical into the air that actually deadens the receptors in the nasal passages so they temporarily no longer function. (Which means, if any good odors come your way, you can’t smell those either!). But odor-masking perfumes and chemicals that deaden receptors in the nose wear off, and the odor returns, because its cause persists.

ATX’s Odor Kill is a major departure from these earlier odor masking methods, Odor Kill technology acts in a unique and revolutionary way. It actually destroys and digests odors – not mask them. This action is accomplished in two ways: First, a fast-acting neutralizer binds with the odor-causing molecules by seizing the airborne molecules and then preventing the source molecules from being vaporized and producing odor — providing immediate relief.